Bosch are a huge name in quality tools, so it makes a lot of sense for them to bring out a jobsite radio that works well with their other tool ranges. This Bosch GML Soundboxx Professional review will be taking a closer look at what’s great, and not so great about the company’s highest rating entry in our top ten table. 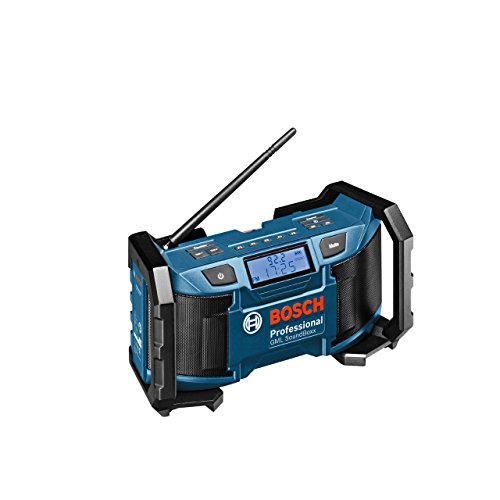 As with all of our review pages, we’re keen to explore each element of the radio in detail, to help you understand more about exactly what you’re getting for your money. As with so many products, brand loyalty can be a big factor in choosing, so let’s find out why this Bosch might be for you.

As with the Hitachi UR18DSL, the Bosch has a good quality FM And AM tuner available, but lacks digital DAB radio support. With the move to digital radio underway, many people are choosing to opt for a digital radio, which is one of the reasons why we recommend the Makita DMR104 so highly. That said, there’s plenty of locations around the country where digital signal is patchy still, so you won’t get much benefit from investing in DAB for a few years – that’s a perfectly valid reason to ignore the feature!

The aerial is also colour coded to match the black casing of the radio, which makes a nice finishing touch.

For convenience, the GML SOUNDBOXX Professional offers up to five storage slots for radio station frequencies on FM and the same for AM, giving a total of ten presets. That’s more important than other types of radio as by their nature they’re more likely to be plugged in and unplugged regularly, so having to retune every time would be inconvenient to say the least. Also rather than just the ‘auto tune’ function offered by some radios, you can choose which stations are stored, rather than the first five per waveband that the radio’s scan function can find.

We’re not sure if the description on the website is incorrect, but the product is supposed to come with two AAA batteries, which ours didn’t. It also suggests that it can run on those as a power source, but we couldn’t see any obvious location for them to go, nor would expect this kind of device to run on such a low power source. It’s not really a big issue, as you’re probably going to buy this radio if you’re a fan of Bosch kit and already have their tools. If that’s the case, many of the batteries are interchangeable (a recurring theme across our reviews of big brand jobsite radios). As with both the Makita DMR104 and the Hitachi UR18DSL though, while it runs from same brand rechargeables, it doesn’t actually charge them, which seems to be a confusing point for some customers.

UPDATE: We completely missed that the AAA batteries actually power the display, according to the Bosch website!

If you do use the Bosch batteries, you’re going to be needing a 14.4V or 18V cell, or alternatively you can use the provided mains cable if you’ve got somewhere to plug in.

The GML SOUNDBOXX Professional works well with the Bosch transport system to allow for easy movement of the product with tools. It’s sized to work with the L-BOXX 136, using just half of the box. It measures just 30.7cm wide by 14.8 cm tall, it’s a remarkably compact unit to carry around. What’s more, it’s only 2kg in weight too, so lighter than the Makita and Hitachi mentioned above. 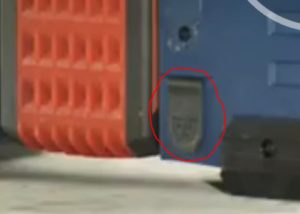 It’s not as unusual as it used to be, but worth noting that the SOUNDBOXX has an auxiliary in socket, which means that you can plug in other devices like mp3 players and mobile phones (using the headphone jack). Of course, that’s on top of the FM and AM radio mentioned earlier – but does raise an interesting point that if you have a mobile device that receives a DAB signal, you can plug that in to use it for digital radio.

It did take us a while to find the port – it’s hidden behind a flap on the back of the unit, as circled in the image.

The sound is good from such a small unit, and it’s actually capable of pumping out quite a loud volume. While it’s not the loudest we’ve looked at, it’s certainly going to meet most people’s needs, and without much distortion even when turned up to high volume. For one of the smaller radios – very impressive!

A lot of the decision making process in which radio to buy is going to come down to what tools you already have, along with how much you want to spend. If you’re just starting out, our top ten table on the homepage clearly shows the Makita ahead of this Bosch radio, but if you’re more of a Bosch tool user don’t be scared away. If you’ve already go the batteries, this Bosch GML Soundboxx Professional review has left us confident that it’s a good choice.