There’s a real retro look about the subject of our Hitachi UR18DSL review. The green and black jobsite radio has managed to pull off a really attractive design, while maintaining the main requirement of being a sturdy and rugged contender for construction site entertainment. In this review, we’re going to go into all the detail of what it’s got to offer, and why you might want to consider making it your own! 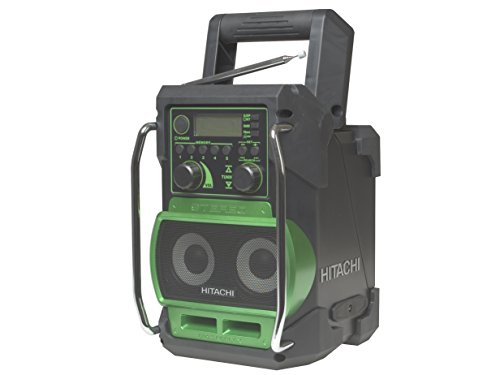 Where better to begin than having a quick look at the features you get with Hitachi’s UR18DSL/J4 model. Not everyone knows what all the various functions are, let alone what they do, so we’ll attack them one by one.

The Hitachi has a dual power source, meaning that you can choose to run it with either the supplied mains cord, or alternatively buy a separate battery to work with it. As usual, nothing’s ever straightforward, so to keep things as simple as possible, the UR18DSL should work with 14.4 and 18 volt slide batteries or cassette style batteries in the 9.6 to 18 volt range. If you stick to the Hitachi brand you should be fine, so if you’ve already got Hitachi tools, this alone would make the radio a good choice. If that applies to you, why not wait until the unit arrives to test it with your batteries, as you can then order additional ones if you need them. Depending on your usage, you may need spares to keep charge availability for all of your tools or for simultaneous use of tools and the radio on battery power.

Finally, the radio is supposed to work with three AA batteries too, but we couldn’t figure that one out. It’s more than possible that it’s beyond our little brains in the JobsiteRadioReviews website office, but if you’re buying and that’s a deal breaker – be wary, as you might want to consider something else!

FM and AM Wavebands

The Hitachi supports FM if you like music stations, and AM too if you’re more of a talk show radio fan. There’s no DAB radio support, though, so if you’re looking for something digital, take a look at our favourite DAB radio, the DMR104 from Makita. As well as the two wavebands, the Hitachi also supports storing your favourite radio stations too, so no need to tune it every morning when you get to site – just plug it in (unless you’re on batteries), switch on, select the station preset and you’re away.

There’s a silver extendable aerial provided on the top of the unit, presumably which will spin through 360 degrees to get a decent FM signal, and it also appeared to help with the AM station quality too, even though that’s supposed to work via a separate internal aerial.

As jobsite radios go, this unit isn’t bad for weight, coming in at just over three kilos before batteries. That’s heavy enough to feel solid, but not too much of a pain (or too bulky) to carry across site with your toolbox. There’s a really chunky carry handle too, so it feels well built enough to withstand the inevitable knocks without worrying about the handle snapping in transit.

The standard three and a half millimetre input is great if you like to change from radio to your own music from time to time, whether that’s a phone or MP3 player. The product is often described as being able to charge a phone via a five volt charging port, but we couldn’t seem to get that on our tests (with an iPhone 6S). Perhaps it’s too power hungry, but it didn’t seem to work for us – your mileage may vary of course.

The UR18DSL sounded great to us, but didn’t quite pack the punch of the DMR104 at higher volumes. We’re not claiming to be experts, but have found that outdoor use tends to be at higher volume than indoor use. If you are going to be using your jobsite radio outdoors, then this may be an issue for you if you have a good ear for detail. We’re not saying it’s bad – just could be better!

This is a good all rounder, as worksite radios go. As you’ll know if you’ve already looked at our top ten, we don’t rate it quite as highly as our top choice – read more in our Makita DMR104 review – mainly due to a lack of a DAB digital radio. On the other hand, this does look good, and has all the other features you’re likely to need, especially if you’re using it at ‘indoor volume’.