The 2019 top pick from the current range of jobsite radios is the DMR104 DAB worksite radio from Makita. As you’re about to find out, it’s an affordable unit that’s packed with features and very little lacking. Below, you’ll find our in depth Makita DMR104 review, but if you’re happy to take our word for it, here’s the latest Amazon price, which is a great place to buy: 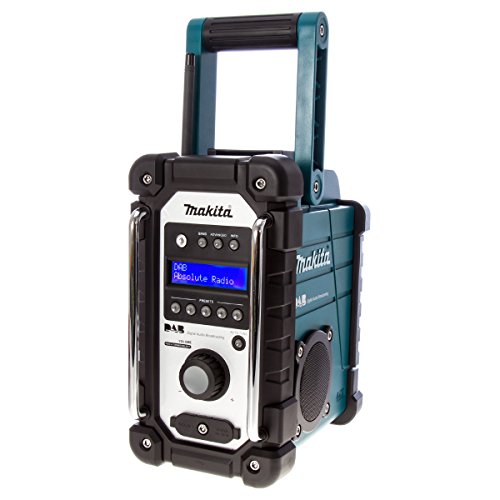 Let’s start by talking about what you can expect from Makita’s DMR 104. We’ll give you a rundown, feature by feature, to help you understand not only what they are, but why they should matter to you!

It’s no surprise that to come with our recommendation a product needs to be really solid – otherwise you might as well pick up a cheap portable radio from the high street. If you’re after a jobsite radio, the chances are you either work on a construction site, or need it for somewhere that’s likely to involve it getting at least the occasional knock or scrape. The DMR104 not only stands up to the test of life on site, but also looks great too – some other models do look rather cheap, whereas the Makita isn’t something you’ll be ashamed to be seen with!

Digital radio is the future, and we’ve actually done a full write up on what is good about DAB radios. Rather than regurgitate it all here, we’ll let you go and read that if you’re interested, otherwise just know that it’s usually a better sound that will do your DMR104 justice, especially with the sound quality you’re going to get with this model – more on that next!

The Makita DMR104 boasts sound quality that’s more than good enough for your construction site. Featuring two quality speakers, there’s also anti shock support so that the sound continues uninterrupted even if the unit is knocked. If you’re on scaffolding or set up near heavy machinery, you don’t want the sound crackling in and out or distorting as you’ll get with lesser models, so the DMR104’s got you covered.

The power is also good enough to be heard across a busy site, so you don’t need to worry about moving it too much as you work. We can’t guarantee that the fun police on site won’t tell you to turn it down though!

As it’s intended to be used outdoors, it’s good to know that a sudden downpour isn’t going to result in electric shocks as you run for cover! The DMR104 is certified to IPX4 standard, which means that you’re covered for up to five minutes to get it under cover when the heavens open. In other words, it’s not waterproof, so don’t leave it out in the rain, but it’s perfectly safe for a few minutes to get indoors, sheltered or back into the van.

It’s probably not going to be the most exciting feature for many of our readers, but there’s a nice twist action on the rugged carry handle to make it that bit easier to carry around.

While we focused above on this being a digital (DAB) radio, it’s not a one trick pony. If you’ve got poor digital reception wherever you set up, there’s also an FM tuner too to fall back on, along with a detachable antenna for use with the waveband that handily stores away in the battery compartment.

If you don’t feel like radio, you can plug a device (such as your phone or MP3 player) into the auxiliary socket to choose your own music instead.

Easy To Use Display And Controls

If you’re like us, complete with trademan’s carrot fingers, you’ll need a radio that’s easy to use with controls that don’t need too much accuracy. The Makita DMR104’s buttons are chunky without being ugly, and there’s an easy to read display to follow what you’re doing and keep track of what’s playing.

Run From Power Cable Or Batteries

There’s a power cable supplied with this unit – if you end up choosing another radio be sure to check what you get, as not all do come with mains cables. If you prefer batteries, you can get Makita rechargeable options to use with the radio. It should be noted that the radio itself does not charge the batteries. Some are common to other Makita products – check out the Amazon description by clicking the blue button to check whether yours are suitable if you already have Makita tools.

To summarise, our Makita DMR104 review found a great little jobsite radio, that’s robust enough to cope with daily life on a building site – and then some. It’s powerful enough to keep you entertained all day, on mains where available and battery where not. If you want an easy to use and reliable radio, this is probably going to be hard to beat. If you can get it for a great price, even better!